Art of Leadership vs. Science of Management 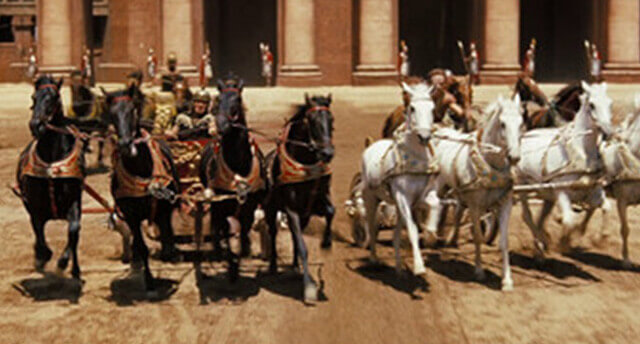 There once was a very famous horse-breeder and racer in Arabia called Ben Hur. He provided fast horses and splendid chariots for the most famous races in the world. He was especially famous for the four-horse chariots.

“Dear sons, I have taught you well. And each of you is an expert in horse breeding and racing. Only one of you can eventually run this family business while the other two will have to find other challenges in life.”

“In order to decide who is the best suited to run this business, I have decided to hold a contest. In one month from now, the three of you will race your four-horse chariots against one another. The winner will inherit my business!”

The three sons were very excited to hear what father Ben Hur had to say and readily agreed to the challenge! The father continued, “I also have one special gift I want to share with you!”

“Besides being able to select from among the finest horses in our stable, I will give each one of you, one wish from this magic lamp of mine. Mind you – one wish only! Use this wish wisely to empower you to win the race!”

The eldest son, Stick Manager was the first to respond. “I will take the four dark angry horses from your North Stable father!” He then went alone into the room with the magic lamp and wished, “I wish to be blessed with the sharpest whip in the world! They will drive fear into these great black stallions and surely help me win the race!”

The second son, Carrot Manager was the next to respond. “Father Ben Hur, I will take the four happy brown stallions from Bhutan.” He then walked alone into the room with the magic lamp and wished, “I wish for the ability to have an endless supply of the tastiest carrots in the world! My happy brown stallions will do anything to get them. I will bribe my brown steads with delicious carrots and keep them happy to win this race for me!”

Both sons had left and the father looked at his youngest son whom he loved the most. “What about you Leader Judah?”  “Which horses will you choose and what will you wish for?”

Leader Judah thoughtfully explained, “With your permission father, I would like to work with our four white mustangs.” His father was surprised.

“You do realize our mustangs are new and from foreign lands Judah. I’ve heard great stories about them but we’ve not worked enough with them,” continued Ben Hur.

“That’s okay father! Great potential is all that interests me,” said Leader Judah. He then went into the room with the magic lamp and uttered these strange words, “I wish for the ability to turn into a white mustang anytime I will!” The magic lamp flashed bright and Leader Judah’s wish was granted.

The next month proved interesting for each of the three sons.

The four dark angry horses started to develop fear from the Stick Manager’s whip. Every time he mounted the chariot, they ran in fear of getting their backs stung with the sharpest and most painful punishment they had ever experienced! Stick Manager drove them hard every day in practice to prepare for the race.

The four brown stallions on the other hand were having the time of their life! Every time they needed a delicious carrot, all they needed to do was slow down a bit. Carrot Manager would produce the tastiest bribe they had ever experienced. So while the brown horses ran and practiced every day, they were putting on some weight eating all those goodies.

Leader Judah began on day one by turning himself into a white mustang and walking into the stable of the other four mustangs. They were quite surprised to see him! He introduced himself as Ben Hur’s son and told them of all the stories how his father and his grand-father and great grand-father had won chariot races with the finest steads from all over Arabia for nearly a hundred years. The mustangs listened in rapt attention to the tales of the great Arabian horses.

Leader Judah then went on to describe how over the last ten years, he had seen mustangs in Jordan brought in by the Americans and Spaniards, winning several races – many beating his father’s Arabian horses. He was fascinated and intrigued by how good and fast they were! Leader Judah went on to describe how his father had added the mustangs to Ben Hur Stables to try and improve services to horse racers and continue the glory of being the best in the world. But he also admitted that his father was not getting the results he expected.

Then Leader Judah told them all about the contest between him and his brothers and how he had wished from the lamp for the ability to turn himself into a mustang, any time he wished. The mustangs were intrigued and asked him why he asked for such a strange wish?

Leader Judah took a deep breath and said, “This is the only way I would be able to speak with you directly. And learn from you how we can together win this race and make Ben Hur Stables great again! How I can win with mustangs for the next hundred years, just as we have won with Arabian horses for the past so many years!”

The mustangs were impressed and motivated with Leader Judah’s sincerity and transparency. They were also quite flattered and overwhelmed by his faith in their abilities. The mustangs realized that if Leader Judah inherited Ben Hur Stables, he would be supportive of them and import more mustangs to join them. They quite liked the warm Arabian climes as opposed to the cold West. They now really wanted him to win the race as much as he did!

The mustangs slowly began to describe the secrets of their success in races such as the ones in Jordon. Unlike the Arabian practices, it was sounded like a much more scientific and disciplined regiment. Judah was fascinated at their description of preparation.

The preparations included a multi-pronged approach ranging from a diet rich in proteins and low in carbohydrates, to a different kind of rubber on the wheels of the horse-carts to reduce friction, to a training routine which alternated between long cardio routines on one day for stamina and several 200-meter dashes on the other days with short breaks to develop speed. They also described to Judah how their old masters made special horse-shoes which were lighter and made from a special metal.

Judah worked with them to work on all of their suggestions. He also enjoyed the routines and often turned himself into a mustang to race and exercise with them. He began loving racing as a horse, as much as a charioteer. Over time, Judah also earned their trust and learned of all their little secrets. One of them that two of the mustangs were a couple and had been secretly married only a few days ago!

The day of the big race arrived. A few minutes before the start, each son walked to his horses.

Stick Manager boldly announced to his four black angry (now quite afraid actually) stallions, “If you don’t run fast today, I swear I will tear your skins apart with my magic whip!”

Carrot Manager lovingly coaxed his brown (now quite overweight) steads, “Win for me my dear team and I’ll give each one of you as many delicious carrots as you can eat!”

Leader Judah turned himself into a white mustang and walked into the stables to find out if his team was rested and ready for the big race. They seem well-exercised, well prepared and mentally fit. However, he sensed tension as he trotted into the room. He candidly asked, “We’ve been friends for a month now. And we all want to win this race as much. If there is a problem, tell me now!”

With teary eyes, the prettiest mustang walked up to him and said, “I’m pregnant. And I’m afraid that in my health condition, I will let all of you down!” There was a stunned silence in the stable. Leader Judah took a deep breath and said, “One for all and all for one – I will run in your place!”

“What?” yelled the other mustangs, “You’re not even a proper mustang – you can’t race!”

“Yes I am a mustang, even if only for a month. And yes, I can race – You’ve taught me remember?,” declared Leader Judah coolly. “I agree I am not as powerful as the rest of you. But I’ve been working out with you as much this last month. Moreover, if I’m not on the chariot, we will have less weight to pull. Most importantly, you’re my friends, and if anything happened to our pretty mustang or her unborn foal, we would never forgive ourselves.”

“With God’s grace, if we win – which we shall I’m sure – then we shall name this baby foal, Judah Ben Hur!!”

All five mustangs neighed a loud cheer that shook the heavens! And they marched confidently into the race-track.

And so it came to pass.

Chariot One with four black horses ran fast. But their exhaustion and overwork of the last one month with their fear had caught up with them. They did not perform to their full-potential.

Chariot Two with four brown stallions from Bhutan worked together as one happy team. But they were overweight and slow and kept slowing down for carrots from Manager Carrot.

Chariot Three had a team where all four mustangs had one and one shared goal only – To win the race, to gain glory for mustangs and get more mustangs into Arabia! They were proud to be led by someone who had sacrificed himself to protect their own. They raced with a passion rarely seen in the desert sands of Arabia – the father was amazed to see the mustangs perform as one committed team. He was filled with pride when he saw his dear son leading from the front. He prayed secretly for their victory – and they did win! With the lighter weight of the chariot, with the new motivated mustang who led from the front and with a common vision of shared success, there was no way in the world anyone could defeat them.

And so it came to pass – Judah inherited Ben Hur Stables. Many mustangs were imported and the story of the foal Judah Ben Hur was often repeated to show how leadership always trumps management using carrots or sticks!

1.     Leadership involves deep anticipatory thinking – about taking calculated risks based on potential as opposed to being more efficient with the tried and tested.

2.     Effective Leadership is impossible without strong character – Leaders have deep empathy and often walk in the shoes of their teams to truly understand what motivates them!

4.     In times of crises, Leaders put themselves at risk even if it means leading from the front – this confidence earns them the unswerving loyalty of their teams.

5.     Leadership is much more about relationship building skills than fear and incentives. In sum, LOVE is a Leadership Strategy

Do you agree? Would love to hear reflections and views!